In Alexandria, Marwa and Manar are fighting for access to culture and for the environment

One of them works for the dissemination of the francophonie and for the preservation of Egyptian cinematographic patrimony. While the other fights against plastic pollution in the Mediterranean. Marwa El Sahn and Manar Ramadan don’t know each other but they represent the same generation of young committed Egyptian people : brilliant, fighters and determined women.

Pandemic lockdown in addition to Ramadan: everything should push Marwa El Sahn, Director of the Francophone Activity Center of the Library of Alexandria, to slow down the pace. However, after the first two weeks of the partial containment in Egypt, the forty-year-old returned to her office at the Bibliotheca Alexandrina. A thesis published last year, workshops and training with young French-speaking people over the past few months, or the organization, with a student, of a “video challenge” on Facebook to promote artistic activities in times of confinement… Marwa is not really the type to take time for herself, pandemic or not. « I don’t feel good if I don’t work », she justifies.

Another very active inhabitant of the Mediterranean city, Manar Ramadan does not intend, either, to take advantage of the weeks of confinement to engage in a work of introspection. Co-founder of the association “Banlastic”, she took part in several online debates since mid-March devoted to “sustainable development” beyond the Covid crisis or to the analysis of the buying spree that several countries experienced at the beginning of the confinement. «  We had planned workshops for April, but were forced to cancel them because of the containment. So we invited the participants to attend these discussions instead »,  explains Manar, 31 years old and full of energy.

The library as a starting point

Like Marwa, Manar was born and raised in Alexandria. For the two young women, who never met, the famous library in Egypt’s second city holds a special place in their lives. Marwa has been working there since 1997 – she was hired there as soon as she finished her studies. Manar, a few years ago, made a brief but significant visit. « I worked for four months as an educator for an exhibition called “Art of the Sea,” which showed the life cycle of plastic in the sea », she says.  « I explained to groups of children all the damage that plastic causes to the underwater world. It was a trigger for me », she emphasizes. Shortly afterwards, to complete her degree in electromechanical engineering, Manar left to study in India for two years. Her stay there was another step in her awareness: she realized that it was possible to carry out ecological policies in a poor country. « I also realized at that time that I wanted to do a job more directly related to human beings than engineering », she confides.

On her return to Alexandria in 2018, she created Banlastic with Ahmed Yassin and Abdelkader El Khaligi (read our article of last year). The association fights against plastic pollution by different means, but first of all focuses on individual awareness-raising. « For the past two years, we have been organizing “workshops” or clean-up operations on beaches or watercourses throughout Egypt to raise awareness of the harmfulness of plastic ». Recently, Manar conducted two of these workshops in Luxor and Aswan, in the South of the country. « In Luxor, when we went to the bazaar to propose to the shopkeepers to use paper bags instead of plastic ones, I was surprised by their positive reaction. In fact, more and more tourists are refusing plastic bags ». In Aswan, after a clean-up operation on the banks of the Nile, the participants were able to talk with a guide specialized in migratory birds. She explained to them to what extent this pollution repels migratory birds that stay in the region. And thus represents a threat to the eco-tourism that has been developing in recent years around the observation of birds. « Our actions are intended to make people think », Manar insists. « We are aware that everything is not going to change radically from one day to the next. But even if they change slowly, things do change ».

The same lucid optimism can be found in Marwa. She works tirelessly to spread the French language and to « open the horizons ». « At the Francophone Activity Center, our workshops bring together young Egyptian and African students who are present in Alexandria, especially at Senghor University », she explains. « For me, it is important to show Egyptian youth that French is not just about France… and to fight certain prejudices ». While racism is still very present in Egyptian society, the CAF is one of the few places where young Egyptians and students from Senegal, Côte d’Ivoire and Mali can meet. « By doing activities together, such as public speaking matches, they learn to respect each other », she ensures. 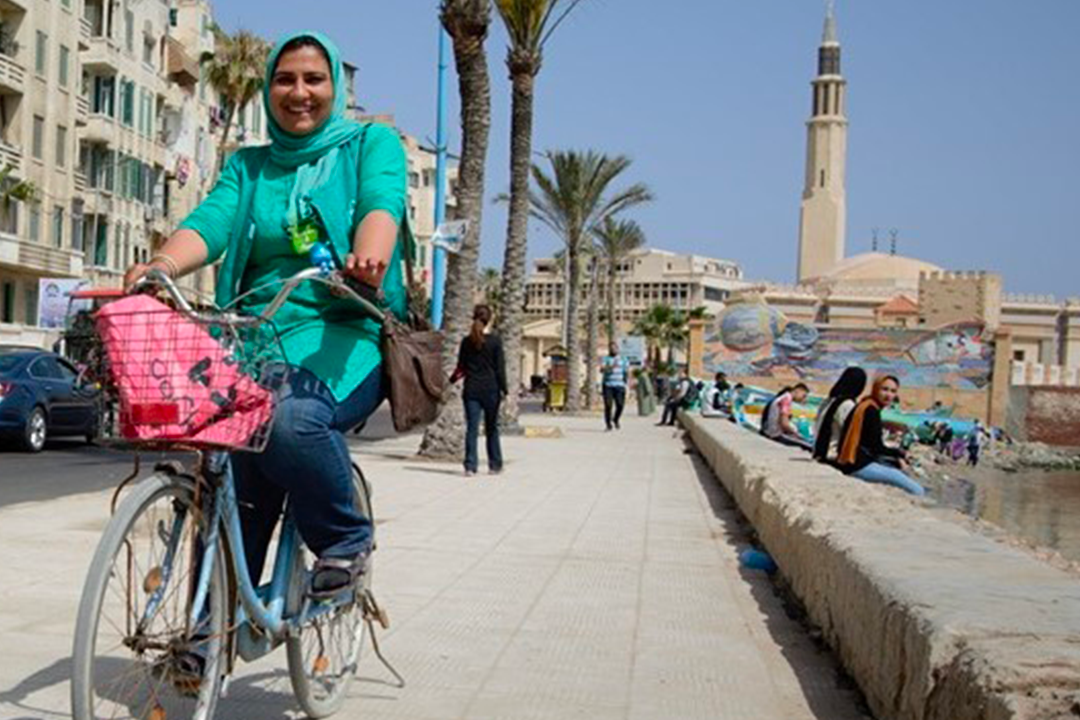 Beyond Cairo and Alexandria, Marwa also develops numerous actions in the Egyptian governorates where the French language is a rare commodity. « We organize training courses for French teachers and students at the universities of Tanta, Assiut, Qena and Zagazig. They come to spend a week in Alexandria and it is often a culture shock ». While they live in regions where traditions still regulate social life, they find themselves, often for the first time, in a mixed group, with strangers besides. « In the beginning they are very shy. But by the end of the week they have created strong bonds and are leaving for their university with great motivation! » says the director of the CAF.

Beyond the French language and books, cinema is Marwa’s other passion. When she was asked, a few years ago, to create an “Art and Audiovisual” department within the library, she tried to inventory and acquire films. « That is when I realized that Egypt has long been the Hollywood of the Middle East and that we didn’t have access to our films ». As surprising as it may seem, there is no real policy of preservation of film heritage in the country of Youssef Chahine. Marwa then embarked on an extensive research work, which led to her thesis published last October in the Harmattan, under the title For an Egyptian Film Library. « A place had been designated in Cairo before 2011. But unfortunately, after the revolution, it came to nothing », she regrets.

Yet, she is far from admitting defeat, on this ground as on others. If there is one struggle that is close to her heart, it is the learning of a certain tolerance, between Egyptians and Africans, as well as between Muslims and Christians. « I am a Muslim, but I was educated in a nun’s  school. The question of religion was not an issue at the time ». She would like young Egyptians to be able to « cultivate themselves before criticizing », to « open up to others with respect ». As for Manar, she simply hopes that the young people of her country will not let themselves be overwhelmed by depression, despite the difficult circumstances prevailing in her country or in the world. « I believe in being in action, and turning bad news into energy to change ». With Manar Ramadan and Marwa El Sahn, young Egyptian men and women can find inspiring models for engagement and action.

Photo on the front page: Manar Ramadan on the Corniche of Alexandria

This site uses Akismet to reduce spam. Learn how your comment data is processed.

Do you know the city of Jelsa in Croatia? Alexandr

One week left before the start of the AJCM FESTIVA